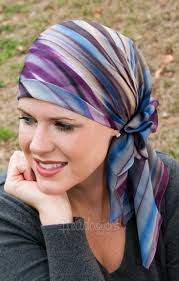 The wig was first and it was good, but I don’t feel like myself in it. It is in the back of the closet for now.
Then came some shopping with my hairdresser friend and being someone who focuses on how heads look, she pointed me toward draping caps, of the sort many Orthodox Jewish women wear. I got some. And thought about the choice to cover hair as a religious one.
Next my friend Jenny knitted me a perfect cashmere cap, soft as a cloud and always the right temperature. I wore it the whole time I was in the hospital.
Then I started thinking about head wraps that African American women sometimes wear. I love those bold, graceful, sculptural Kente cloth wraps you see in some African American churches and at Sweet Honey and the Rock concerts. But that is not me, so I went for a simple daily wrap that African American women on the street and friends have told me looks good.
Next, I was speaking with a UU woman minister and she offered me membership in a sisterhood of women UU ministers who had cancer. I accepted with tears in my eyes and she sent me a group of powerful healing women’s chemo caps worn by sisters I didn’t know I had.
Last, one of the Muslim women in my interfaith women’s book group offered to go shopping with me to buy a scarf and teach me how she and her fellow Ahmadiyya Muslim women wear their scarves. And I started to think about other group of women’s choice to cover their hair for religious reasons. She also gave me a cap that is so beautiful it makes me smile.
The 200th anniversary of an important sermon in Unitarian history is coming in Baltimore and they have asked ministers and seminarians to process in robes. I hope I can go and I’ll be wearing my scarf. I’ll feel good about that.
Source of Love: Good can come out of evil. Good doesn’t have to win, just be as weighty as a feather landing on grass to show entropy isn’t victorious. Alexa is now joining this sisterhood of head covering women a group she never knew existed. It is a sisterhood composed of so many branches of beautiful, powerful, religious and healthy women. Let her celebrate membership. And let us be open to siblings we don’t even know we have, as life with its twists moves us forward into deep connection with new and important ties to brothers and sisters that will bind and hold and support us.